do you know -JEDCO

State Comptroller- Those with property in Cherokee County owe the State in school taxes:

Cherokee County, TX:
For decades land owned by the Good Ol’ Boys and Biddys has been appraised at a substantially lower (almost zero) tax rate compared to property owned by those not in the clique. A quick online review of elected officials’ appraised property tax values shows the glaring discrepancies. Cherokee County appraises commercial property in Jacksonville at 15% below actual market value, and 35% below realistic estimates in Rusk according to a recent State Comptroller’s property tax audit. (Source: Daily Progress)

Local attorneys, JEDCO and Chamber of Commerce members own the most valuable commercial and rental properties in Cherokee County and have favored status with the Cherokee County Appraisal District. They own the Low Income Housing, the halfway houses, and the old folks’ homes, i.e. privately owned subsidized Section 8.

Even though they own the majority of taxable properties within Cherokee County, they do not share the tax burden.

On the other hand, those who are not in the good graces of CCAD are hit arbitrarily with high taxes and lawsuits, forcing many to leave. To mitigate the loss, out of region companies are enticed to set up shop and pay into the County coffers or they too risk being sued out of existence. By hook or by crook, Cherokee County puts nepotism over the needs of its residents, regardless of the dwindling tax base loss to local school districts. Property owners living outside the county coterie can expect their Balance Due Notices in the mail first.

Why should those who run the county into the ground pay property tax?

In 2012 the State Comptroller’s Office found the Cherokee County Appraisal District “UNSATISFACTORY” in its operational procedures and ability to implement a reappraisal plan. (Source: State Comptroller) School district tax values would continue to be reported too low under the State’s enhanced Methods and Assistance Program auditing every 2 years.

Cherokee County Chief Appraiser Lee Flowers said around two-thirds of 2,900 property exemptions could be in jeopardy of failing to meet state requirements.

The district would require landowners with agriculture exemptions to provide proof of productivity and meet state production requirements. So landowners who produce hay must provide proof they are producing hay at amounts and quality levels consistent with state and regional numbers. Cow-calf operations would be required to meet per-acre head counts consistent with production requirements, he said.

A landowner claiming his property is an orchard, but only has four fruit trees on 10 acres, won’t make the cut anymore, he said.

“We’re aiming to stop abuses of what’s required by state law,” Flowers said. “So is it a qualified production operation or that ‘I just want lower taxes?'”

However in 2015, Cherokee County had failed the State’s audit of Non-Farm properties along Lake Striker in the New Summerfield School District. Residential sales were “not previously available” and those they recorded were as far as 25% below actual Market Value. Kinfolks’ homesteads on Lake Striker had their unpaid tax liability limited at a 10% increase, while the rest of the county taxpayers made of the difference. (Source: Cherokee CAD) This keeps the public from petitioning for a property tax rollback election. 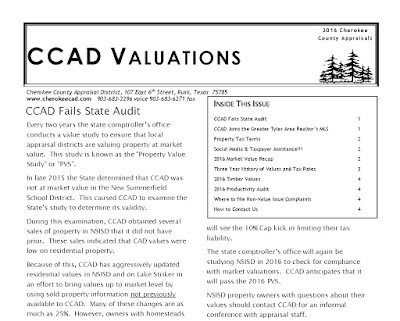 Nepotism is a recipe for disaster.

The trend of not accurately recording real estate sales and shorting the State in property taxes continues today.

As a result, the State Comptroller’s Office audit will penalize taxpayers $1 million in the Jacksonville School District and $700,000 in the Rusk School District.

The decision is on appeal. Taxpayers can expect another School Bond election and sales tax hike on the horizon. The school districts will ask for new facility funds that will actually go to pay off the tax deficit and funnel money back to Good Ol’ Boy construction projects. Tax revenue from new construction will be excluded to solicit businesses while farms, ranches, and dairies will be hit hardest. As the State Comptroller found, Cherokee County “record keeping” does not pass the smell test.

According to information issued by the state Comptroller’s Property Tax Assistance Division, Jacksonville and Rusk schools could be penalized severely in state funding if a pending appeal by the appraisal district is not successful, Flowers said in a Feb. 12 release issued by his office.

“We first received notification on Jan. 31,” with amended updates arriving at his office later because “they’ve had to reissue numbers a couple of times,” Flowers said.
The state’s study indicates the local appraisal district is below market value on both residential and commercial real estate valuations in the two school districts. The effect of an unsuccessful appeal could penalize JISD a million dollars and RISD $700,000 in overall state funding, according to the CCAD release.

Flowers said he doesn’t agree with the state’s overall assessment of commercial values, based on the market information available to his office.
“They (state findings) indicate we are 15 percent low on commercial real estate in JISD and 35 percent low on RISD commercial real estate. These types of property in our county are difficult for anyone to appraise,” he explained. “However, if the state has reliable data not previously available to us, we will analyze their information and move forward accordingly.”

Data from property value studies – which “looks at our values and our at-market values” – and something called a “MAP audit” (methods and assistance program audit) alternate each year, he said.
“The most recent MAP audit was in 2018, while the value study was in 2019,” he said, explaining that a grace period is what gaps the two.
“It is apparent that these schools might have received a grace period if not for a failure in the appraisal district’s most recent state procedures audit,” the CCAD release stated. “This grace period would have held the schools harmless in state funding for one year.”
For a school to qualify for the grace period, the state requires that the local appraisal district must score a “pass” on four key questions.

In 2018, the appraisal district missed one of those key questions, the release stated.
“That question contained 15 subparts. Of those subparts, Cherokee CAD passed all but one. In order for that key question to be considered a ‘pass,’ all 15 subparts must have been a ‘yes.’ Overall, the appraisal district successfully passed 77 out of 80 questions in the audit,” it added.

He and his staff had from December to April to correct the deficiency.
“We would have appreciated either an earlier notice of the question’s inclusion or more time to assemble the data in order to properly implement the correction,” he said.
Currently, Flowers is appealing the value study, which has a March 23 deadline.
“Originally, it was March 11. The extra time can’t hurt us, but that also delays any kind of resolution. If we think we have enough to file and feel comfortable in doing so, we’ll file sooner,” rather than wait, he said.

Meanwhile, his office is focused on looking at all the properties considered by the state in their findings, and “we’ve submitted a request to see their work files,” Flowers said.
If the appeal is successful, the potential for loss to the schools could either be eliminated or substantially reduced, he said. (Source: Daily Progress)

Have a look at the JEDCO Property’s here