Cherokee County would like to thank the DPS and other agencies in helping them corner and kill a strung out parolee they released 6 weeks earlier for the same domestic violence / kidnapping charges he was arrested for the last half a dozen times he’s been in their custody.

On the weekend of April 9, 2022, a hostage situation developed AGAIN in Rusk, TX involving another whacked out career criminal, his ex-wife, and another female victim held against her will. SWAT and neighboring police negotiating teams were deployed, and roads were closed for over 48 hours. The suspect Scott Anson Coe eventually released his hostages and killed himself in the wee morning hours; the Cherokee County Sheriff’s Department, intervening agencies, and local media did not immediately identify the deceased suspect who made national news barricading himself inside a mobile home. Their relationship to the paroled kidnapper and his bail release history hits too close to home.

Scott Anson Coe, 44 has been in and out of Cherokee County jail multiple times, most recently in February 2022 for aggravated kidnapping bodily injury (Source: Jacksonville Progress March 6, 2022). Previous charges over the last two years alone in Cherokee County include aggravated assault / family violence on 4 occasions, KIDNAPPING, possession of marijuana; and parole violations in Smith County.  The Texas Rangers have been called to investigate the parolee’s suicide-by-cop during the standoff; details have not been released. Coe’s criminal background has also not been released. His catch-and-release incarceration spanning over 20 years throughout East Texas includes forgery, burglary, assault, evading arrest, and theft. Scott Coe was out on bond for kidnapping for the umpteenth time, when he kidnapped again. 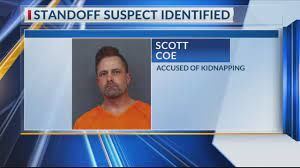 “We don’t know why this crack head goes on kidnapping sprees after every time we release him for kidnapping and beating up his ex-girlfriends….we just can’t figure it out…”

In January 2022 this year, Cherokee County District Attorney Elmer Beckworth reduced possession of marijuana charges from 2019 against Scott Coe to a Class C Misdemeanor “Health and Safety Violation” despite the following concurrent arrests.

Scott Anson Coe was arrested in Cherokee County, TX for:

The fifth time’s the charm.

When violent child molesters and parolees on the county dole are arrested, reporting agencies misspell their names and bury their sex offender registrations.  Rusk resident and lifetime sex offender registrant Juston Eric Shaw was charged in February 2022 for resisting arrest and attacking police officers, then released on bail. (Source: Jacksonville Progress) The Cherokee County District Attorney’s office loves their friendly neighborhood sex offenders racking up charges to the point they start killing people. Small town prosecutors need an easy murder quota to look like big shots in local newspapers. Why not use and discard their favorite drug snitch?

UT Health Jacksonville ER physician Karl Kauffman from Troup, TX was identified as a random “East Texas doctor” after being busted for sexually abusing a child in Cherokee County. His credentials and history were immediately scrubbed from local hospital websites. Dr. Kauffman worked only in Jacksonville, TX and is the county’s only on-call emergency room surgeon.  News articles of his arrest were post-dated to keep his under age sex crimes with his next of kin off the front page.

The public was not made aware of Dr. Kauffman’s child molestation arrest until a week after his incarceration, buried in East Texas news archives.

Kauffman’s professional license is currently suspended following his arrest according to the Texas Medical Board. (Source: KETK) The UT Health Center in Jacksonville, TX has since scrubbed Dr. Kauffman’s employment, as has every other East Texas medical facility he was affiliated with, including the Nacogdoches Medical Center and Woodland Heights Medical Center in Lufkin. UT Health Tyler vehemently denies Dr. Kauffman was employed with their hospital “at the time of his arrest,” according to their spokesman. (Source: Tyler Paper)

When pedophiles are called for jury duty, does Elmer Beckworth make them sit in the hallway when their own child molestation charges come up, or do they stay put during deliberations? Cherokee County judges don’t disqualify sex offenders, and the Tyler Court of Appeals rubber stamps it, so how does that work exactly? Do they flip a coin for who goes grab some snacks? The one who brings the best Girl Scout cookies gets No-Billed? Do they just wander around the Rusk courthouse until the DA investigator gives them a ride home at the end of the day?