Hundreds of QAnon supporters have gathered in Dallas expecting the return of John F. Kennedy Jr., who they believe would then help reinstate former President Trump, The Dallas Morning News reported.

According to Newsweek, a post from a wildly popular QAnon account said that after Trump is reinstated as president, he will step down so Kennedy Jr. can become president.

”Frankly, I’m kind of shocked at how many people turned out for this,” Holt said. “This wasn’t a widespread belief, even among QAnon followers.”

Holt also said that the fact that a large number of people were able to “mobilize in person” over a conspiracy theory is concerning, according to the Morning News.

JFK Jr. died in 1999 along with his wife and sister-in-law after their plane crashed in the Atlantic Ocean off Martha’s Vineyard.

JFK Jr. has been a popular figure in the QAnon community for years. In 2019, some members believed that he would return on July 4 as Trump’s vice president, according to a Forbes report.

QAnon supporter Micki Larson-Olson said she believes that both JFK Jr. and his father are still alive and the former president will help usher in the Trump-JFK Jr. administration, Morning News noted.

“We’ll figure that something happened in the plan that made it not safe to do it,” Larson-Olson said. “If it doesn’t go down how I believe it will, that’s OK. We’ll figure it just wasn’t the right time.”

They seem to be running late.

Hundreds of conspiracy theorists gathered at the AT&T Discovery Plaza in Dallas to await the arrival of former President Donald Trump and John F. Kennedy Jr., whom they expected to announce an unlikely campaign for the White House around 12:30 p.m. Tuesday.

As of late afternoon, those optimists were still waiting.

Kennedy’s absence was likely due to the 1999 plane crash in which he died. His father, former President John F. Kennedy, was fatally shot in November 1963 at the downtown Dallas locale where supporters had gathered.

The event had been promoted through the QAnon conspiracy collective. Members of the online forum — whose support Trump has embraced — believed Kennedy would introduce the 45th president as the reinstated leader of the U.S., according to the Dallas Morning News. Newsweek reports that at least one widely followed QAnon supporter posted that Kennedy would be the new president and Trump would be anointed “The King of Kings.”

QAnon Shaman attorney: ‘These are people with brain damage’ »

Supporters of the Trump/Kennedy ticket reportedly took their places Tuesday morning, some with paraphernalia supporting Trump and Kennedy. Others sported traditional MAGA gear. The announcement was to have taken place near the infamous “Grassy Knoll,” from which conspiracy buffs have long believed a hidden gunman shot the 35th president despite findings to the contrary.

Lee Harvey Oswald was charged with firing the deadly shots from a nearby book depository. He claimed he was not guilty and was killed before his trial.

A Daily Beast reporter posted images that appeared to be from a Monday night gathering in advance of Tuesday’s anti-climactic reveal party. Merchandise worn by QAnon supporters read “Trump Kennedy, Where We Go One, We Go All, 2020.”

A minute before Trump and Kennedy were expected to appear Tuesday, the crowd began saying the Pledge of Allegiance. What appeared to be a black pickup truck rolled by, but did not stop. Video shows apparent QAnon supporters continuing to look down the street while awaiting Trump and Kennedy. Some of those people expressed their distaste for “Fake News” as camera crews asked them to explain the no-show.

Newsweek reports that JFK Jr. has until midnight to show. At least one Twitter user joked he might save his return for Tuesday’s Rolling Stones concert in Dallas.

Howard Stern encourages Trump supporters to get together and drink disinfectants »

While QAnon is often dismissed as a freak show by Americans in the mainstream, it has enjoyed support from congressional candidates and military figures, including former Trump administration national security adviser Michael Flynn. QAnon followers were among the activists in the Jan. 6 insurrection at the nation’s Capitol, where thousands of conspiracy theorists gathered under the false claim that the 2020 election has somehow been stolen from Trump. President Biden won that race by more than 7 million votes.

Among QAnon’s right-wing beliefs is that high-ranking Democrats are involved in a child sex trafficking cabal that is fueled by the blood of infants. The group had hoped Biden’s inauguration would amount to a massive roundup of alleged offenders and the continuation of the Trump presidency. That prediction also fell short. 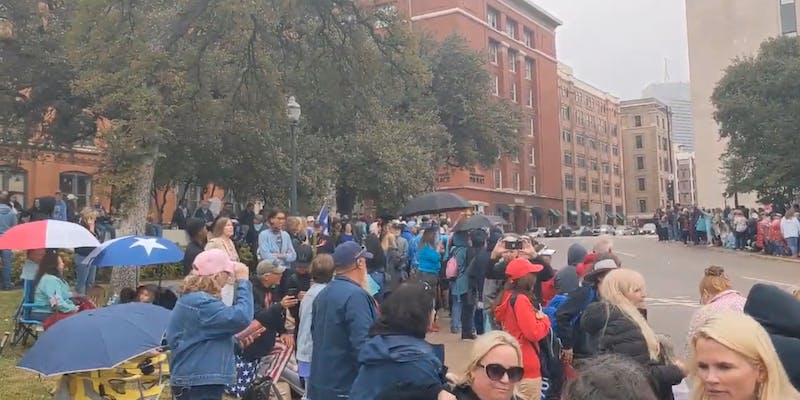