At least two hospitals in Houston have been so overwhelmed with coronavirus patients this week that officials erected overflow tents outside. In Austin, hospitals were nearly out of beds in their intensive care units. And in San Antonio, a spike in virus cases reached alarming levels not seen in months, with children as young as 2 months old tethered to supplemental oxygen.

Across Texas, health officials warned of overloaded, strained hospitals, a growing crisis not seen since early February, when a late winter wave deluged the state’s health care system. More than 10,000 Texans have been hospitalized this week, and at least 53 hospitals were at maximum capacity in their intensive care units.

In recent days, Texas has averaged about 12,400 new cases a day, nearly double the number seen just two weeks ago, according to a New York Times database. The spike comes as about 1 in 5 U.S. hospitals with intensive care units, or 583 total hospitals, recently reported that at least 95% of their ICU beds were full. One worry about the highly contagious delta variant, which has fueled surges across the country, is whether it might test the capacity of health systems.

The sudden increase of infections has refocused national attention on the efficacy of masks and comes as the state’s governor, Greg Abbott, remains firm in his refusal to enact any statewide mandates requiring masks while also prohibiting local officials from doing so in their own communities. To help manage the surge, Abbott appealed this week to health care workers outside the state to travel to Texas and help the overloaded hospitals. 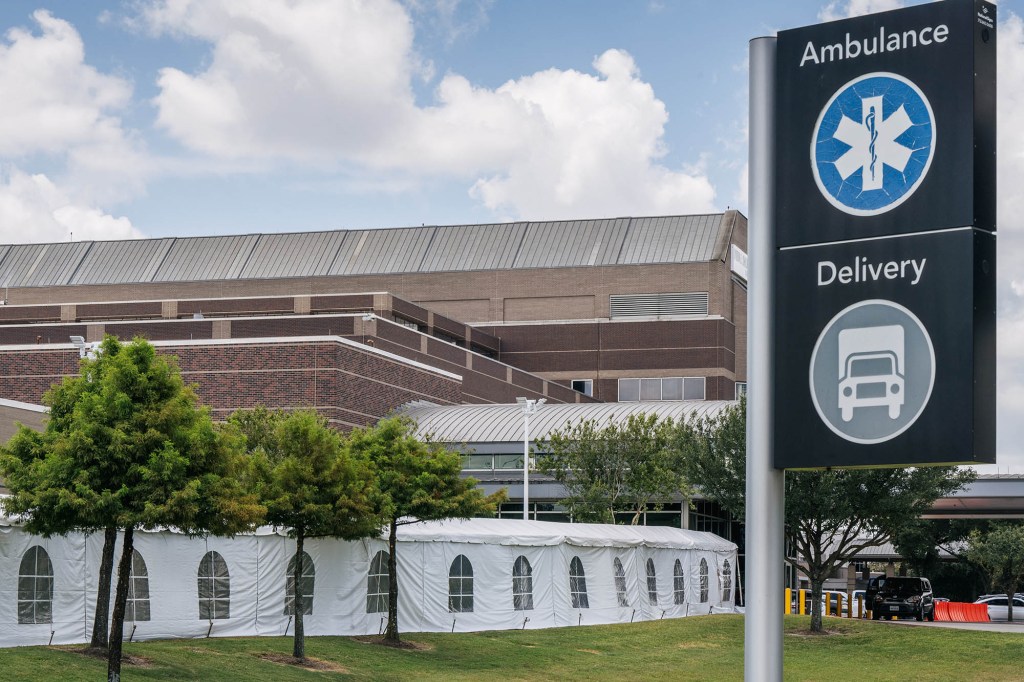 The number of coronavirus-related hospitalizations across the state is projected to climb to well over 15,000 by the end of August, according to the University of Texas at Austin’s COVID-19 model consortium.

“The fact that we’re having to construct the tents shows that the system in general is not prepared,” said Amanda Callaway, associate administrator for Harris Health System, which oversees the two hospitals in the Houston area requiring overflow space. “There’s lots of concern. There’s only so much you can do, only so many rooms. We’re just trying to respond as fast as we can.”

Doctors are also treating patients in waiting rooms because of a shortage of beds, she said, adding that at least 90% of the coronavirus patients are unvaccinated.

Dr. David Persse, Houston’s chief medical officer, blamed inadequate attention by state officials to highlight the importance and necessity of vaccinations to stem the surge, with Abbott framing it as an issue of individual rights. “It’s the wrong approach,” Persse said. “The rhetoric around this has been such that people adhering to their right to make their own decisions are endangering themselves and their families.”

Abbott, like governors in Florida and elsewhere across the South, maintained his position even after the Centers for Disease Control and Prevention reversed course and recommended that both vaccinated and unvaccinated people wear masks indoors in high-risk areas. He issued an executive order prohibiting local governments from mandating vaccines and prohibiting school districts from enforcing masks.

Local officials in some of Texas’ largest cities, including San Antonio, Houston, Dallas and Austin, have defied Abbott’s orders and issued new mask requirements in city buildings and schools, citing the unfettered spread of the virus and low vaccination rates. In Texas, about 56% of those 18 and older are fully inoculated.

According to the Texas Department of State Health Services, just shy of 240 Texas children were hospitalized on Tuesday with the coronavirus. Citing those figures, President Joe Biden on Wednesday told reporters that he was exploring whether the federal government has the authority to intervene in state mandates issued by Abbott.

Over the weekend, authorities in Austin, the state capital, warned residents of a “dire” situation in the city, with hospitals so overrun with patients that they were short of both staff and resources to care for the sick.

Earlier this week, the resurgence was playing out in unnerving ways at the Children’s Hospital of San Antonio, where a growing number of children were being admitted with severe symptoms of COVID-19, including high fevers, chills, coughs and shortness of breath. Many others arriving for unrelated illnesses were also testing positive for the virus, hospital officials said.

The delta variant and other respiratory infections were to blame for the crowded ward, with up to 15 COVID patients on any given day, said Dr. Norman Christopher, chief medical officer at the hospital.

“We are now entering a new phase where our volumes are increasing much more exponentially here just like on the adult side,” Christopher said. “And that’s compared to almost nobody just a few months ago.”

Dr. Abhishek Patel, who works in the hospital’s pediatric ICU, walked in and out of a room where a 6-month-old and a 2-month-old were battling severe COVID-19 infections and were breathing with the aid of supplemental oxygen. This week alone, he said, two teenagers, who had other underlying health problems, succumbed to the virus.

In a room nearby, Cerena Gonzales, 14, moaned in pain. Last week, she was an excited teenager looking forward to starting her freshman year in high school. On Tuesday, she was surrounded by hospital equipment. She and her younger sister got sick after their parents, Carlos Gonzales, 47, and his wife Elizabeth, 42, began developing COVID symptoms and were taken to the hospital. None of them had been vaccinated, Elizabeth Gonzales said.

“We hesitated,” she said. “We were all a healthy family.”

As soon as she was discharged, Gonzales, still breathing with the aid of two portable oxygen tanks, rushed to her daughter’s side. She caressed her daughter’s forehead and tried to keep her upbeat. She recalled in tears the harrowing scene days earlier when doctors put her on speakerphone so that she could hear as her daughter was intubated. “I thought I was going to lose my mind,” Gonzales said. “I could not be there with her.”

By Tuesday afternoon, Gonzales said she believed the worst of the crisis was over. She untangled her daughter’s thick black hair from IV tubes and gently encouraged her to drink orange juice.

Several members of her family had been ravaged by the virus, she said, and so she now plans to organize a family excursion to get vaccinated. “There is no reason any parent should go through this,” she said.

Nearby, Anne Marie Baker, a pediatric nurse, had the grim task of cleaning a room where just moments earlier a teenager had died from the virus. Baker took off her masks and slumped into a chair to catch her breath. Children under 12, who do not yet qualify for a vaccine, are most at risk, she said.