Some are still in Dallas awaiting the return of JFK JR.

Supporters of former President Donald Trump gathered to attend one of his infamous rallies, to bond with like-minded MAGA cohorts and bathe in Trump’s ill-fated promises and unhinged conspiracy theories.

They got their money’s worth. Trump pushed the debunked theory that the FBI had plants among the insurrectionists at the U.S. Capitol on Jan. 6. He pushed the so-called “massive evidence” that the 2020 presidential election was “rigged and stolen,” evidence that has yet to reveal itself, despite Republicans in state houses looking really, really hard for it.

And he continued to lie about the role of Democrats in the violent insurrection. The crowd, unsurprisingly, ate it all up. 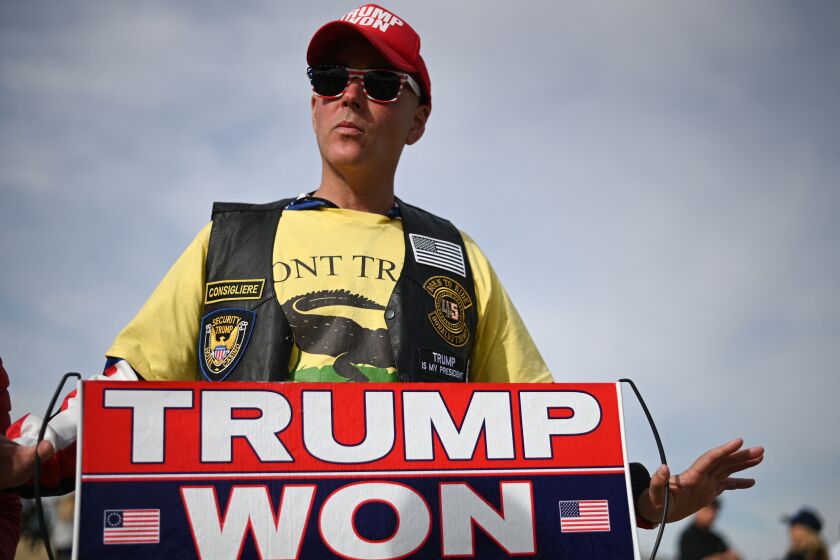 But one conspiracy theory Trump has yet to publicly embrace is the, erm, “idea” that John F. Kennedy Jr. — who definitely died more than 22 years ago in a tragic plane crash — is alive and poised to be Trump’s running mate in 2024.

Go to any MAGA gathering and it isn’t hard to find the folks who earnestly believe this lunacy. And if maskless rallies aren’t on your 2022 agenda, just go to TikTok or YouTube. Jaw-dropping interviews with JFK Jr. truthers abound.

Politico caught up with one in Arizona, who admitted, “I don’t want to sound too much like a conspiracy theorist,” about the return of a man who definitely is no longer living, “but he’s coming back. He’s supposed to reveal himself on the 17th if he’s truly alive. I think we’ll see him.”

For those of you with access to a calendar — admittedly an evil apparatus of the deep state — Jan. 17 has come and gone, and John-John has yet to make an appearance. That we know of.

Fear not, however. These “predictions” are merely suggestions, it would seem. According to QAnon adherents, John-John was also supposed to arrive on Nov. 23 of last year.

And that was after he was definitely arriving on July 4, 2019.

You’d think that all these disappointing no-shows would pierce the infallibility of the JFK Jr. resurrection-or-revival-or-reemergence theory, but alas, “evidence” is the domain of the elite, the establishment, the Deep State, the left, the so-called scientists and the lamestream media.

But you’d also think the fact that Trump himself hasn’t endorsed this conspiracy (yet) would also provoke some gentle chin-scratching.

Or at the very least, you’d wonder why the newly alive son of a beloved Democratic dynasty would reemerge from hiding after two decades to run for president with a reviled Republican loser.

Obviously, there are good explanations for all this. According to one Trump supporter, JFK Jr. was in fact at the Arizona rally, but he was disguised — you guessed it — as Trump. (You didn’t guess that?)

If you think this sounds more like a kooky cult than a major political movement, I have two words for you: Harold Camping. Camping was an engineer-turned-evangelist who launched California-based Family Radio in the late 1950s. Camping was bit by the doomsday bug hard, and first predicted the Biblical End of Times would occur on Sept. 6, 1994.

When the day came and went, he pushed his prediction back a bit, to the end of the month, Sept. 29.

In the decade that followed, Camping raised millions in donations and gained an international following off of these failed predictions. In 2011, he returned to the doomsday business, announcing a new date for the Rapture — May 21. When that day disappointed, he gave his final prediction, Oct. 21. He retired that year following a stroke, after leading his company into financial ruin. Many of his former followers described becoming disillusioned and coming to view him as a cult leader.

He continued: “Because he was convinced the world was ending, he had abandoned music, quit his job, and essentially put his life on hold for four years. It had cost him friends and created a rift between some members of his family.”

“It all seemed so real, like it made so much sense, but it wasn’t right,” the former follower said.

We’ll have to wait and see if QAnon and the JFK Jr. truthers have the same wake-up call one day, if anything can pull them out of the cult of Trump, where I’m sure it all seems so real.