A former Houston police captain was arrested Tuesday and charged with aggravated assault with a deadly weapon after an Oct. 19 incident in which the ex-cop, one Mark Anthony Aguirre, ran a guy off the road and held him at gunpoint. Thank goodness, Aguirre had a very good reason for crashing his SUV into the back of the man’s truck and forcing him to lie face down while Aguirre shoved his knee into the man’s back: Aguirre was absolutely certain the victim was part of a vast scheme to steal the 2020 election with fake votes!!!!!!

Except for that spoiler we put in the headline: The guy Aguirre forced off the road was an air conditioning repair tech whose box truck contained the tools of his trade and some AC parts. Not a single forged ballot in the truck or a very scary shed at the guy’s home, let alone the 750,000 fake absentee votes Aguirre was just sure he’d find.

But Aguirre was no lone crazed vigilante. He was a crazed vigilante paid over a quarter of a million bucks by a prominent rightwing GOP donor who frets that Joe Biden is a communist. Which is to say, a mainstream Republican these days.

According to a court document filed by arresting officer J. Varela, the AC repair guy said he’d been driving along at 5:30 in the morning on Oct. 19 when Aguirre’s black SUV swerved into his lane and nearly hit him, then once more got into his lane and crashed into the back of the truck. When the driver went to check on the driver of the SUV, Aguirre pointed a gun at him and told him to lie on the ground. Aguirre put his knee in the guy’s back, to make sure he didn’t flee to the Antifa mothership, probably.

The driver assumed it was some kind of robbery. He said two other vehicles arrived, and someone drove off with his truck; police found the truck a few blocks away. No word yet on who the other guys were; Aguirre refused to tell police the names of his fellow patriots because preventing the communist overthrow of America by AC techs is serious business.

Aguirre explained to cops who arrived on the scene that he and some other dudes had been surveilling the AC guy 24/7 for four days as part of a private investigation — by something called the “Liberty Center” — into massive absentee ballot fraud they were sure he was part of. Aguirre also explained that the AC tech was “using Hispanic children to sign the ballots because the children’s fingerprints would not appear in any databases.” Also, he said the whole fraud scheme was engineered by Mark Zuckerberg, who had spent $9.37 million to do it. Clearly, that precise an amount proves Aguirre knew what he was talking about.

This part is fun, too! Aguirre told Varela at the scene that Varela could “be a hero or part of the problem,” and added, “I just hope you’re a patriot.” Aguirre also said he’d already

contacted the Texas Rangers, Ken Paxton, and the regional director of the Texas Department of Public Safety for assistance with his investigation but had not received any help.

Wow, so pretty much the whole state was in on the plot!

Varela’s affidavit also notes that a few days before the incident, Aguirre had called the Texas Attorney General’s Office to ask for help with the investigation, and was very upset when he was told that police couldn’t be sent to arrest the AC guy just because some crank with no evidence called and accused him of trying to steal the election. So you can see why Aguirre had to take things into his own hands and do a citizen’s arrest.

As for that “Liberty Center,” that would be the “Liberty Center for God and Country,” which appears to have sprung into existence in September, or at least its Facebook page did.

It’s the brainchild of Republican megadonor Steven Hotze, who has been very active this year in the run-up to the election, especially when it came to making sure people couldn’t vote too easily. The Texas Tribune lists some of his brave measures to protect Texas from democracy:

Hotze was among a group of Republicans who unsuccessfully sued to have nearly 127,000 Harris County ballots tossed out this year. He was also among Republicans who tried — and failed — to stop Gov. Greg Abbott from extending early voting during the coronavirus pandemic, a suit for which Aguirre had provided an affidavit, stating that he was involved in an investigation into a “wide-ranging and fraudulent ballot harvesting scheme” in Harris County.

The Liberty Center paid Aguirre a whopping $266,400 for his investigatory services, the vast bulk of it, $211,400, being delivered the day after the Oct. 19 run-in, according to the affidavit. The Liberty Center’s own website site was at the time begging for money to help its “investigation,” claiming it cost $200,000 a week to keep 20 investigators at work busting election fraud. Nothing about running people off the road, of course. The site and the Facebook page are a mishmash of paranoid bullshit about election fraud and the COVID-19 “hoax,” because of course they go together as part of the plot to destroy America.

This happy little meme from the Liberty Center’s Facebook may illustrate what Hotze’s investigators were certain they’d find: 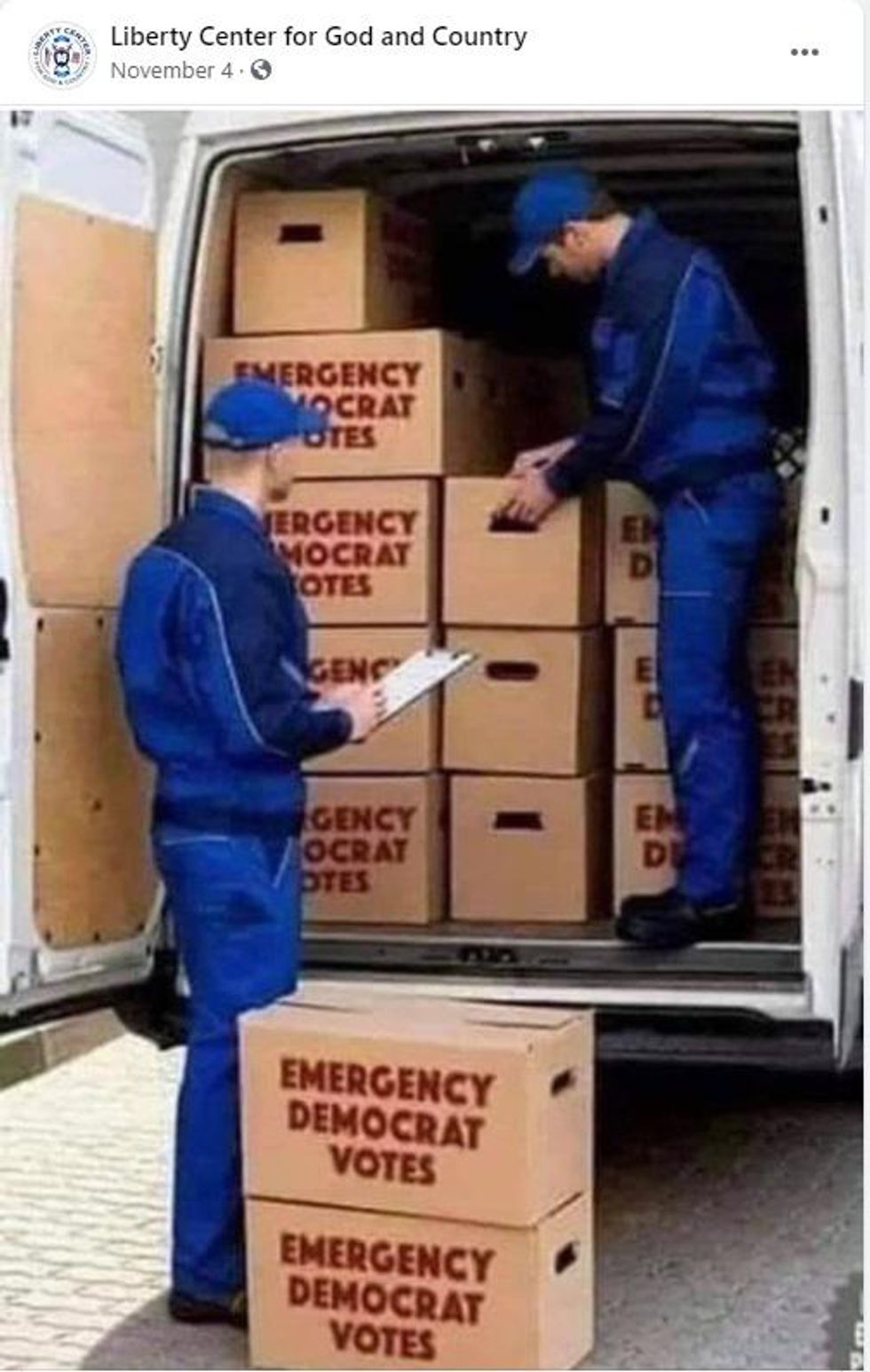 Fortunately, Aguirre, who was permanently suspended from the Houston Police “after a botched raid outside a westside K-Mart in 2002,” has an attorney, Terry Yates, who explained to local TV that he believes this is all ” a political prosecution,” because Aguirre was

working and investigating voter fraud, and there was an accident. A member of the car got out and rushed at him and that’s where the confrontation took place. It’s very different from what you’re citing in the affidavit.

Yes, a “member of the car.” Drive and vote carefully, kids.