I am worried for our democracy.

So is Travis County Clerk Dana DeBeauvoir, the county’s tough-as-nails elections chief for the past 35 years. Which is why DeBeauvoir is finally speaking publicly about a serious threat she faced this year: an effort by Attorney General Ken Paxton to charge her with a crime for her handling of the 2020 election.

“I don’t take kindly to being threatened and (feeling like) I can’t speak back,” DeBeauvoir told me last week.

To be clear, Paxton did not succeed. (Nor did his office return multiple requests for comment for this piece.)

Earlier this year, Paxton’s office tried to indict DeBeauvoir on a charge of unlawfully obstructing a poll watcher, a Class A misdemeanor that could bring up to a year in jail. It was a petty and trumped-up charge, and it did not fly, not even in Paxton’s hand-picked venue of Williamson County, known for its more conservative leanings. A grand jury there returned a “no bill” in April.

It all sounds so tidy in the past tense. But DeBeauvoir lived through months of uncertainty. Paxton pursued the complaints made by a few partisan poll watchers in November 2020, and it wasn’t until July that DeBeauvoir learned the grand jury had declined to charge her.

“There was nothing I could do to defend myself except to go hire — me, personally — go hire private attorneys. That was $75,000 to me,” DeBeauvoir said.

Travis County commissioners voted in August to reimburse her, but early on she worried she might have to eat those bills. Had the case gone to trial, she said, her legal costs would have reached hundreds of thousands of dollars.

“Of course, part of the AG’s purpose in doing that was to intimidate me and financially bankrupt me,” she said. “It was a deliberate thing.”

And part of a deeply troubling trend.

Threats on the rise

Elections administrators and poll workers around the country faced an unprecedented wave of attacks last year, as Donald Trump pushed his big lie of a stolen election in a desperate bid to usurp the presidency. That lie put a massive target on election workers’ backs: An investigative report by Reuters found more than 100 threats of death or violence made to U.S. election workers and officials during the 2020 election.

Some of those threats involved nasty phone calls or angry kooks showing up at election workers’ homes, which is terrifying enough. Separately, though, some Trump allies are using their government positions to threaten election officials with criminal charges. The new election law that Texas Republican lawmakers passed this year creates more opportunities for election workers or people assisting voters to be charged with crimes over simple misunderstandings.

The strategy is twofold: Paint our elections as unreliable, providing justification for policies that make it harder to vote or easier to alter the outcome. And make the job of running elections so perilous that good, civic-minded people decide they cannot shoulder the risk — creating openings for new people with partisan motives to steer our elections.

DeBeauvoir timed her announcement to ensure that other people interested in the job could run for it next year. She’ll wrap up her term after running the Jan. 25 special election to fill the Austin City Council seat being vacated by Greg Casar, who is running for Congress.

The ordeal with Paxton is “not the reason I’m leaving,” she told me. “I don’t want my counterparts in other counties to think this was successful.”

Grumet: Watch for others in the crossfire of Texas’ abortion laws

The tabulating process actually occurs in two neighboring rooms: Paper ballots run through counting machines in a large room, while the computerized tallies from each polling location’s ballot-scanning devices are compiled in another room. The process ensures the ballot counts from each voting site are verified multiple ways — producing results the public can trust.

A third room, called the media room, has large windows providing views into both counting rooms.

For years, DeBeauvoir said, partisan poll watchers could go pretty much anywhere in those three rooms to see whatever they wanted. Last November, however, presented two challenges.

The COVID-19 pandemic was going strong, and remember, there was no vaccine available then. So DeBeauvoir was concerned about maintaining social distancing for everyone’s safety.

At the same time, she said, a few of the partisan poll watchers seemed intent on harassing the election workers. Her office policy required visitors to wear masks, but some poll watchers refused. DeBeauvoir showed me a picture of one poll watcher — unmasked — standing right over an elections worker at a computer.

In another incident, a poll watcher leaving for the day took off her own mask and tossed it in the face of an elections office staffer, who happened to have preexisting conditions, DeBeauvoir said.

“(The poll watcher) says, ‘Here, I’ve already had COVID. I’m gifting you with my antibodies,’” DeBeauvoir said, her voice steely with outrage.

“I had no problem with them coming in and looking at stuff,” DeBeauvoir continued. “They always have. That’s a good thing. But they were just being so ugly, and when (the poll watcher) threw her mask at (the staffer’s) face — any question in my mind that anything they said was legitimate was gone. I know exactly what they’re trying to do.” 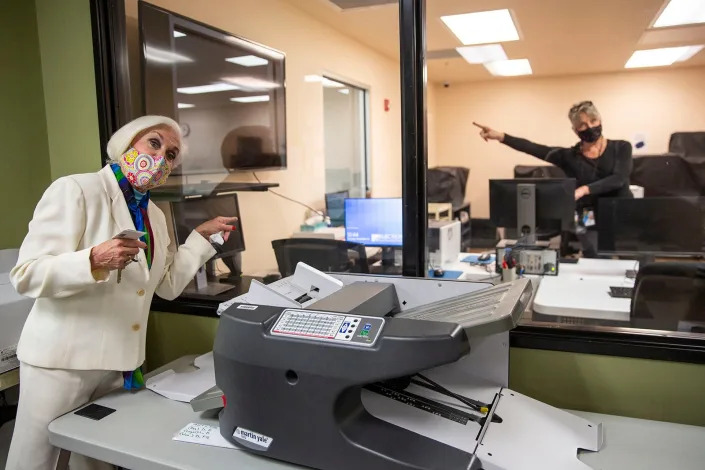